Is the ITSM Industry About to See Even More Tool Churn?

An interesting thing happened in the IT service management (ITSM) industry last week. I wouldn’t have noticed, or even known about, it had it not been for a Back2ITSM post on Facebook that showed multiple examples of one ITSM tool vendor’s marketing (see the photo below), related Twitter posts, and then this blog post. For me, the important thing for the ITSM industry is not what the advert below and other promotions say, or how they say it, but where this was and what it means. With the implications relating to far more than the advertiser (Freshworks) and the object of their marketing activity – a potential competitor (ServiceNow). 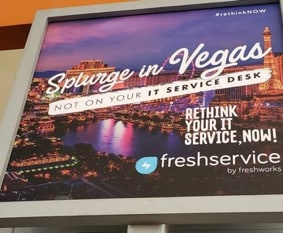 Before I continue, in the spirit of openness (or disclosure if you want to get all fancy), I need to state that I have worked for, and continue to do pieces of work for, both of these companies. And that I also do work for most of the well-known ITSM tool vendors and the wider ITSM industry.

So, what happened (that impacts the ITSM industry)?

Now the above might just seem like a cheeky advert placed at Las Vegas airport’s taxi rank to grab the attention of the existing customers and prospects arriving for the ServiceNow Knowledge18 event. We’ve seen similar before – in fact, I was at an earlier Knowledge event when a competitor offered liveried-up rickshaw rides between buildings to the event attendees.

But it seems that these taxi-rank adverts were just the tip of the marketing iceberg for Freshworks at the Knowledge event. Not only was there advertising, they were also carrying out the marketing equivalent of “random acts of kindness.” (Yes, I know it’s not the right term – and maybe not an appropriate term – but it’s the best way I could describe what happened as Freshworks tried to raise its industry profile in a nice way).

In addition to the many taxi-rank adverts, event attendees:

It might have been an “aggressive” marketing campaign, but it looks to have been done in a non-aggressive way (as I said, a nice way). And as to the appropriateness of the campaign, it probably depends on your perspective. Some will hate it (and think it inappropriate), some will love it, some will like it but question its impact, some will find it mildly amusing, and other will just go “Meh!”

But as already mentioned, what happened at Knowledge18 is not as important as what it potentially means for the ITSM industry. In particular, the ITSM tools market.

What Freshwork’s Knowledge18 marketing campaign means (for the ITSM industry)

There are two obvious points to make about the ITSM industry impact from where I sit (and I don’t just mean at my desk).

Firstly, Freshworks has always had money to spend and now it looks as though it will be spending more of it on ITSM-based marketing. I didn’t see the full extent of Freshwork’s Knowledge18 campaign (as I wasn’t there) but, as with most marketing efforts, it was probably a serious chunk of change dropped to raise the profile of both Freshworks and Freshservice in the ITSM community.

With an expected 18,000 people attending Knowledge18 (including ServiceNow and partner/sponsor staff) – making it the largest gathering of service management (and ITSM) professionals in the world – there were certainly a lot of ITSM-interested eyeballs to catch (whether the eyeball-owners were looking for an alternative ITSM tool or not).

Secondly, Freshworks has started to make an attempt to go up against the largest and most successful ITSM tool provider in the enterprise space (and my apologies to ServiceNow who might find this description limiting). Which I think signifies that Freshworks is moving beyond its traditional hunting ground (of smaller organizations with the occasional big win) to actively target larger customers who might otherwise choose one of the many ITSM tool vendors that currently sell to the mid-market up.

It would be interesting if this worries ServiceNow. It would also be interesting what other ITSM tool vendors make of Freshwork’s marketing campaign at Knowledge18. In some ways, it’s reminiscent of when a relatively young software-as-a-service (SaaS) ITSM company was gaining market awareness, and large customers. From where it built what would eventually become a multi-billion-dollar/year company that’s still growing.

Have I read too much into Freshworks Knowledge18 marketing campaign?

Obviously, I could be adding two and two to make five, but what else would drive such a marketing campaign? Especially one that’s so public and with “no way back” without a certain level of humiliation in the ITSM industry (unless this is played as a bit of fun).

Freshworks could have kept it simple (and made the lives of its Freshservice marketing team simpler). They could have continued to sell Freshservice to the existing customers of the Freshdesk product (a help desk for external customer support). Or they could have aggressively targeted the customers of one or more ITSM tools vendors that have “lost their way in the ITSM space.”

But they didn’t. They instead aimed directly at the market leader. Which, unless it’s a case of firing once and running (to hide), has to be an indication of an ambition beyond their current focus and levels of customer success in the ITSM industry.