As an IT transformation consultant, I’m regularly engaged by clients who have experienced a cycle of disappointment and failure in trying to bring about real change in their organizations.  A recent trip to the fairground reminded me of many of the emotions that they go through during their change programs. It spawned this article because, as a specialist in the creation of multi-vendor IT operating models (based on the principles outlined in the service integration and management (SIAM) framework), these emotions really hit home.

I appreciate that some of my references might seem a little tenuous, but please stay with me because there’s a point to all the fairground mentions when looking at your IT operating model.

Are you experiencing a cycle of disappointment and failure in trying to bring about real change in your organization? Check out this article from @SteveBMorgan. Click To Tweet

Have you ever been to a fairground rifle range booth? You know the ones, where there are “everyone’s a winner” signs and a whole bunch of massive teddy bears hanging at the back of the stall. The guy in front of you has just won one of those bears, to huge shouts and whoops, and he has just given that huge bear to his child.

You want that feeling too, don’t you? You want to see the look on your small child’s face as you hand them the huge bear. So, you “step right up” and pay your $5 for three shots. It seems like a big cost, but you’re going to win, right!?

As you take aim your confidence grows in line with the expectation of your child as they look on. You squeeze the trigger and your first shot heads towards the bullseye but somehow it hits the yellow outer ring. Never mind, there are two more shots to go. However, with each attempt, your confidence drains as they too miss the bullseye.

So, no big prize this time. But there’s good news – you’ve won a goldfish in a bag. You hand it to your child and their disappointment is palpable. You know what to do – just one more $5 and this time you’ll nail that top prize and the kid gets the bear.

As you squeeze off those next three shots your heart sinks. The outer rings are all you can hit. There’s no bullseye, no big bear, and no recognition as the “best dad in the world.” But you have won another goldfish.

This feeling of expectation, failure, and cost is not just restricted to fairground visits

Let’s talk about the issue of repetitive mistakes. It’s something that I’ve witnessed regularly when organizations seek to change their IT operating models, in favor of multi-vendor operating models using the SIAM framework.

Don’t misunderstand me here though. I’ve been involved in the development of the SIAM Bodies of Knowledge and I’m a huge advocate of the SIAM principles. The issue isn’t with the content, it’s with the execution. The root of the issue lies with the construct of the SIAM operating model and the commercial agreements that underpin it.

SIAM and IT operating model design

It’s relatively simple to create a set of design principles for a target IT operating model for an IT organization with multiple suppliers. They tend to include phrases such as trust, collaboration, cultural alignment, common working practices, and adopt modern commercial framework principles.

However, these design principles are often lost once the new process, governance, and tooling designs are complete and the organization moves from SIAM design into operation. This is where the underlying organizational culture interprets these design principles. For all of their good intentions, people fall back into the same old ways of working, where suppliers are hit with a big stick until they miraculously start meeting the unachievable targets agreed during the SIAM design phase.

The lessons learned from the rifle range

Back to my analogy, the guy who won the big bear before you, well that’s all the hype around SIAM from organizations who claim to have cracked it. Those who’ve somehow managed to find the magic elixir of processes, governance, and cultural change to truly bring about a collaborative working environment where service providers and customers work in unison.

The extra $5 you paid for another three shots? That’s your organization constantly reinvesting in new target IT operating models to somehow help resolve the issue of poor user feedback, low-quality IT services, and an IT team that cannot react to the needs of the business.

Your failure at the second attempt? That’s your organization’s inability to translate a sound set of objectives and design principles into a practical IT operating model, underpinned by a contract framework which eschews the traditional set of availability and reliability targets in favor of targets that reward the behaviors we want from our suppliers – collaboration, openness, and innovation.

The moral of the (IT Operating Model) story

Make sure that the game isn’t rigged before you start playing! You can also put the IT operating model odds in your favor by:

You might be wondering who the child was in my analogy above. That’s your customer. They’re completely baffled as to why you didn’t hit the bullseye and why they can’t have the huge bear. The good news, though, is that they’ve now got two new goldfish they didn’t want!

If you want to read more on the solutions to this – and to find out how we help organizations like yours to design and build highly effective IT operating models – then please read our Ultimate Guide to Design + Build. 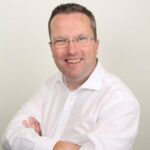 Steve is the Director of Syniad IT, an independent IT consulting organisation, specializing in the design, build, implementation and optimisation of service integration and management (SIAM), IT service management (ITSM), and IT transformational change programmes.