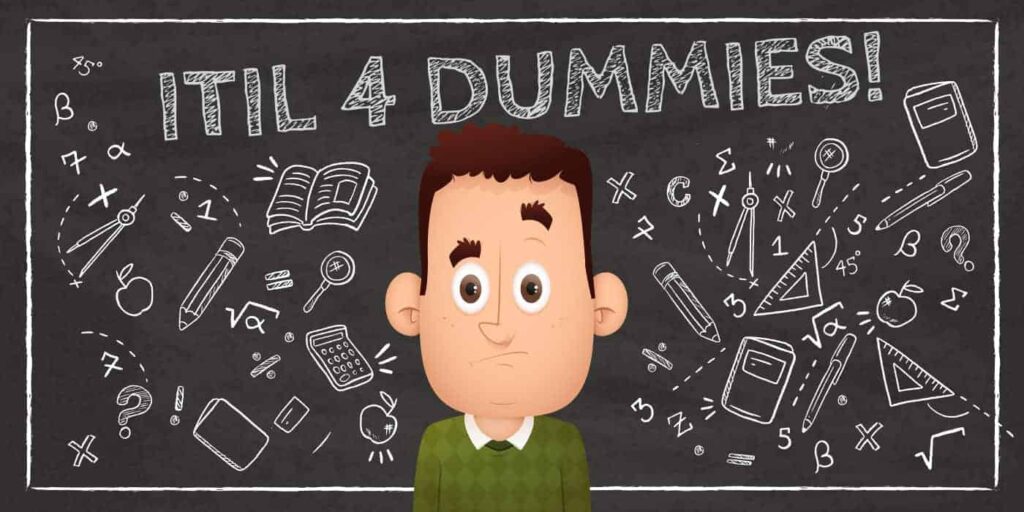 I wrote a two-piece blog on the ISACA website entitled “IT Governance for Dummies” (Part 1, Part 2). This is my “ITIL 4 Dummies” follow up. It’s not meant to be derogatory in any way but instead is an attempt to get us to think, and draw some sensible conclusions, about the way we adopt ITIL.

I think the word “Dummy” should be added into the ITIL lexicon – with a description of what we mean of course to describe all those ITIL 4 Dummies out there… Hopefully, not you of course!

With the massive amount of time, effort, and money spent on ITIL in the past, it hasn’t always delivered on the hoped-for benefits. Herein lies the first indication of the link with the word Dummy – with too little thought or judgment as to what problem it was hoped that ITIL would solve or what value it was hoped that it would deliver.

Next is that word “value”

It’s the “elephant in the room” word – everybody uses it, but it means something different to everybody. Nobody really likes to question it. It’s a bit like the emperor’s new clothes. The emperor is given a new suit of clothes. The makers say the clothes are invisible to those who are unfit for their positions, stupid, or incompetent – while in reality, they make no clothes at all. Nobody dares to say that the emperor is naked! Until a little boy points out “he isn’t wearing any clothes!”

Value is the same, nobody wants to be seen as “unfit, stupid, or incompetent.” So, we all declare that ITIL will help deliver value until somebody asks the question “Yes, but what is value!?”

Here @GamingPaul shares his “ITIL 4 Dummies” in an attempt to get us to think, and draw some sensible conclusions, about the way we adopt #ITIL. Click To Tweet

“…Hmm good question, we haven’t really thought about that!”

ITIL therefore becomes the goal rather than what we hope to achieve with it.

Another symptom of our lack of making considered decisions is the definition of a service according to ITIL. I’ve asked now in the last 15 years more than 40,000 people in workshops and at conferences:

“…But it isn’t important!” many say

The definition of a service is now (in ITIL 4):

“A means of enabling Value co-creation by facilitating Outcomes that the customers want to achieve without having to manage specific Costs and Risks” (VOCR).

Have you really thought about the VOCR that you’re hoping to achieve?

Have you agreed on this with the business? Decided upon the value that the investment in ITIL will deliver?

Have you made considered decisions and reached sensible conclusions as to which bits of ITIL will best help address the business needs (and, of course, the value it will bring IT too)?

If you don’t know the definition of Value, Outcomes, Costs, and Risks (and have therefore probably not defined or agreed on these with your customers) then how can you measure that you’re getting what you didn’t know you were hoping to get in the first place?

“Yes, but that’s all stuff for managers, what has that got to do with the people doing the work?”

Well, the people doing all that work are probably being given more work than they can handle which means considered decisions need to be made about the priority of work.

But which work delivers the most value, or which work reduces risk? Or which work, if left undone, will create risk or cause more downstream costs?

If you don’t know the definition of Value, Outcomes, Costs, and Risks then how can you measure that you’re getting what you didn’t know you were hoping to get in the first place? Thoughts from @GamingPaul here. #ITSM Click To Tweet

The people doing the work have to be able to make the right decisions about what work to do first. If they can’t, then they have to keep escalating to managers to make the decision for them. Which, in effect, slows things down and annoys everybody.

In these days of Agile ways of working many business leaders want faster outcomes. “Velocity” is the new addition to the buzzword bingo board, which is one of the reasons why the Agile-y world is complaining about ITIL slowing things down. The quicker we can make the right decisions, the better.

The importance of decision making was also confirmed in a recent Forbes article, The Netflix Decision Making Model Is Why They Are So Successful. Their desirable behaviors are driven by a set of corporate values. The first value is “Judgement” which “outlines the company’s decision-making ways and accompanying expected behaviors.” Notably, Netflix encourages its employees to “make wise decisions despite ambiguity.”

“…Hmm, there’s that word ‘judgement’ again, and ‘employees’ – the people doing the work.”

Conclusion: In order to make considered decisions it’s good for everybody to know about the value, outcomes, costs, and risks associated with those decisions.

Something to think about

If you’re already “doing” ITIL 4 – as in reading the book, getting the certificate, wondering how to take the next steps, or waiting for the next set of courseware and certificates before actually “doing” something. Then please pin up the Service Value System (SVS) model on the wall and look at it for five minutes.

Let it REALLY sink in. Think about it.

Then, when people walk pass and ask you, “What is that?” – you can discuss it.

Respond by asking “What is the most important thing in this model”? Let them think about it. This raises lots of different answers! Very often ITSM practitioners respond with “practices” or “service value chain.”

Pin up the #ITIL4 Service Value System (SVS) model on your wall and look at it for five minutes, says @GamingPaul. Let it REALLY sink in. Think about it. #ITSM Click To Tweet

“Isn’t it the VALUE coming out?”

One of the guiding principles (in the outside layer of the SVS model) is “Focus on value” – this immediately raises the question “What is value?” and creates a dialog – “What is it, and value for who?”

If we don’t know what value should be popping out at the end in this model, then how do we know we’re doing the right things?

One thing is for sure, we haven’t really been focusing on value for the last umpteen years as this is STILL a top-scoring ABC card (Attitude, Behavior, Culture) in our global workshops! 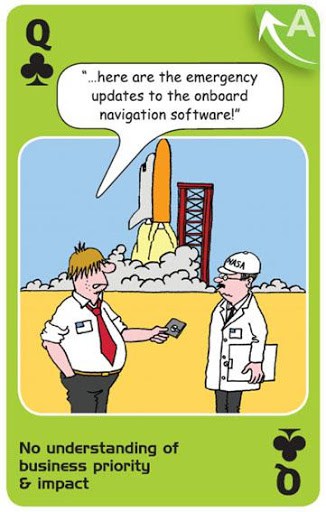 “How are we supposed to know what value is?”

This brings us now to the next layer in the ITIL 4 SVS model – Governance. The governance layer needs to make sure that the value is known and achieved, and set guardrails about what to do when there are conflicting values competing for resources in the value chain thingy in the middle…

Governance needs to ensure that the large number of demands/opportunities coming in from the left (of the SVS) are prioritized so that the right value pops out of the other end. And as quickly as possible it seems in this day and age. Which means that governance needs to ensure quick decision making to prioritize based around value. (If you’re an ITIL Expert and think that I’m talking nonsense, please see the “End-bits” section below for an extract of the Governance responsibilities from ITIL 4.)

However, below is a top-scoring card from ABC workshops relating to business behavior: 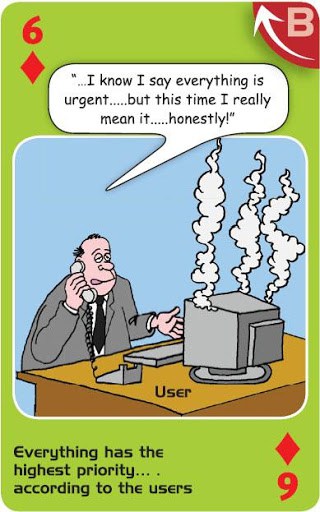 Which makes it very difficult to make sure that the right value is coming out the other end (of the SVS). Especially when all the different business unit managers and users keep insisting that everything has the highest priority.

This is even worse when you look at the following statement:

A Sloan Management Review article titled “No One Knows Your Strategy—Not Even Your Top Leaders” revealed that “Only one-quarter of the managers surveyed could list three of the company’s five strategic priorities. Even worse, one-third of the leaders charged with implementing the company’s strategy could not list even one.” And these are the very same leaders who are insisting that all their IT demands have the highest priority!

This sounds to me like a good case for a bit of governance. Otherwise, how can we ensure that the right value pops out? And not doing governance seems like very silly behavior. Don’t be an ITIL 4 Dummy

The value chain thingy in the middle

Assuming that we’ve now got this value stuff sorted out. This now means all the other stakeholders in this “value chain thingy in the middle” all have to work toward these shared goals. This means collaboration – but what does effective collaboration LOOK like?

Well, we haven’t been doing a great job of this so far in the last umpteen years. Collaboration can be characterized by “throwing it over the wall,” communication based upon “listening to give an answer,” rather than “listening to understand” accompanied by a lot of yeah buts, and assumptions!

Once again collaboration is one of the ITIL 4 guiding principles on the outside layer of the SVS – indicating that it’s probably important. But how many people have thought about “What behaviors will we see that demonstrate we’re effectively collaborating?” and have then taken considered decisions on how to foster these behaviors?

Do more with less!

What else is in the outer layer (of the ITIL 4 SVS)?

We spend more time solving the same incidents again and again, not addressing an underlying technical, or quite often, behavioral cause that results in defects being passed downstream. Often coming from design and transition type activities and causing more and more incidents, rework, etc. – hopefully, you get the picture.

The trick is how can we do MORE value creation and LESS value leakage stuff’?

But are we so busy handling the growing amount of business demands and opportunities – that ALL have the highest priority – that we don’t prioritize improvement work?

How can we do MORE value creation and LESS value leakage stuff’ asks @GamingPaul. #ITSM Click To Tweet

We keep thinking that improvements are big ITIL implementation projects, that take a long time and don’t deliver the hoped-for value! Once again, one of the guiding principles is “Progress iteratively with feedback.” Make improving your work part of your work and then gaining direct feedback on whether the improvement actually improved anything – preferably linked to some kind of value, outcomes, costs, or risks (Oh no, he’s not banging on about that again is he!?)

What are we improving and how do we prioritize the improvements? That is the bit about practices in the SVS. I won’t go into that as ITIL people generally get all that stuff. But what will we prioritize? Well, once again this is where governance has a role to play.

As stated in the ITIL 4 Governance section: “…The governing body should also have visibility of the outcomes of continual improvement activities and the measurement of value for the organization…” Which brings us back to where we started – staring at the SVS model and confirming the most important bit is the value popping out the end.

I’ll leave it you to conclude who the ITIL 4 Dummies are in YOUR organization.

Here are a few snippets of governance-related text from the ITIL 4 Foundation edition publication that support much of the above points I make: